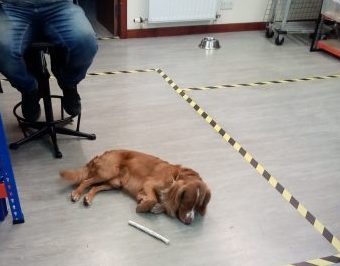 It really doesn’t matter how ferocious your guard dog is, a determined thief will find a way.

APS firmly believes that the best way to protect your valuable assets, property and people is to have an effective perimeter barrier. I often bang on about the proliferation of cameras, which have their place in any security system, but let’s be real they record the theft, not prevent it.

You could have a guard dog, security patrols, gate house, a multi-layer fence cordon. Effective security relies on detection as well as prevention. Even with human or canine patrols you can’t cover everywhere, all of the time.

Our dog probably won’t stop an intruder, but our Flexiguard system will certainly let you know if someone tries.

…and it can’t be defeated with chocolate drops!